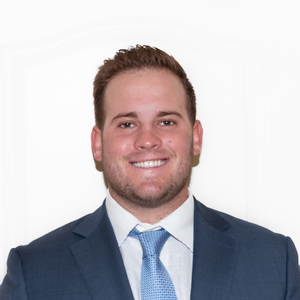 Stephen Nicholas is Vice President and Financial Advisor for Northeast Private Wealth Management. He began his financial services industry career at J.P. Morgan in 2020 and played a pivotal role in helping his team receive their first Barron’s Top 100 Private Wealth Management designation. His role as a wealth advisor included providing holistic financial planning services for high-net-worth individuals, corporate executives, professional athletes, entertainers, and clients approaching retirement. Stephen comes from a family decorated with accolades. His father, Dr. Stephen Nicholas, has been recognized as “One of New York’s Best Doctors” by New York Magazine for the past ten years, and his mother, Eileen Nicholas, was the New York territory manager at the Ace Medical Company as well as a Registered Nurse. Stephen and his siblings were all captains of their respective collegiate athletic teams and have built a family legacy as student-athletes on both the amateur and professional levels.

Committed to giving back, Stephen is actively involved in Learning From Our Differences (LFOD), a program that brings education and visual, hearing, and intellectual or developmental impairments to grades K-5 through guest speakers and presentations as well as in-class parent-led programming. He also devotes his time to raising awareness for the PaulieStrong Foundation.

Stephen graduated from Franklin and Marshall College in 2020 with a B.A. degree in Economics and a concentration in Entrepreneurship. He currently holds the professional registration of Series 7 and Series 66. Stephen resides in Scarsdale, NY, and enjoys playing golf with friends and family in his spare time.